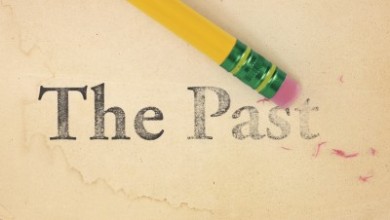 The great thing about America, they say, is that it’s a land of second chances. People come here to make a fresh start. Your ancestors probably did. And it’s a land that loves to forgive, to let people try again and start over after their mistakes.

That’s a lovely theory. But how do you “start over?” There’s no reset button to life. There’s no way to erase the past. There are real-life reasons (financial and familial and familiar) why most of us can’t just fold up our tent, hop a train, and start a new life in a different town. And even if you could, would that really be escaping from the past? You tote your past with you everywhere you go. It’s the invisible baggage that no porter will ever carry for you; only you get to push and pull and tug and lug it from place to place.

Whitman, one of America’s first great poets (and a personal favorite), famously claimed that he was large, that he contained multitudes. Beautiful. Lyrical. It’s a fundamentally democratic poetic statement, abundant and amenable to differences. I loved it as a college student. I love it as a theory.

The darker side that I overlooked in my first enthusiastic embrace? What if you can’t stomach some of the past (personal, cultural, national) that you contain? How do you make sense of not just the good that you have done but also the errors, sins, and mistakes that you have committed?

In my novel Ghost Music, characters try different tactics: some attempt to ignore the past wholly, some are swallowed by the past and lose the present, while others learn to balance what happened (good and bad) with the present. It’s a delicate issue, this effort to contain not only the multitudes that you like, but also those that you want to excoriate and burn and vomit away.

Yes, Mr. Whitman, we do indeed contain multitudes. At times, though, it is easy to wish we did not, that we could be simple, happy, uncomplicated monads, blissfully unaware of the past and able to leave all mistakes behind. Ghost Music shows the impossibility of that wish. It is a novel not just about past sins, but also about learning to forgive (both yourself and others) and attempts to reconstruct.